This is one my favorite comix I’ve produced to date, starring JTR3 and me from our sci-fi rock band Americans UK, and co-starring The Ramones, Donna Summers, Debbie Harry, and featuring quite a few cameos. Please enjoy. 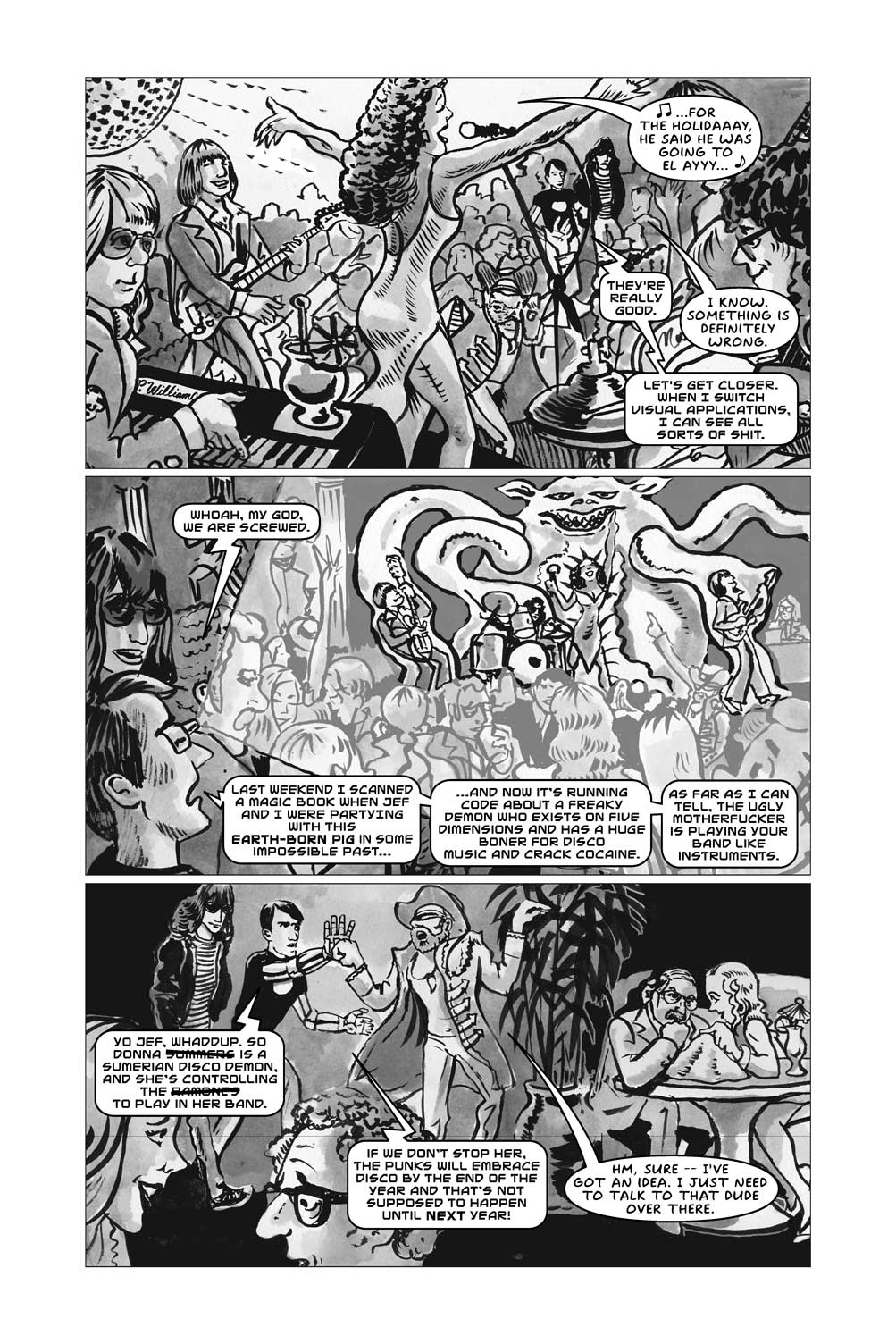 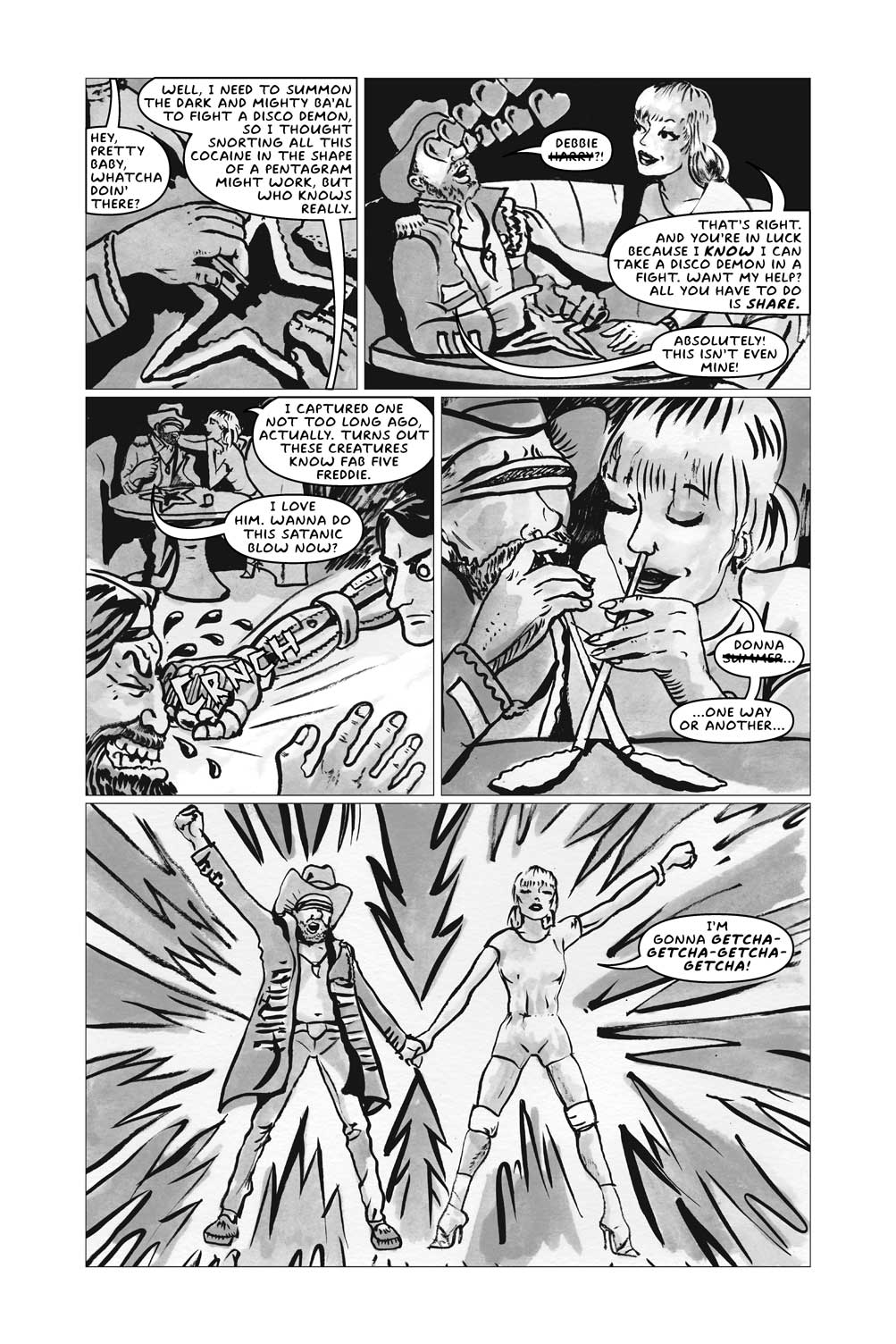 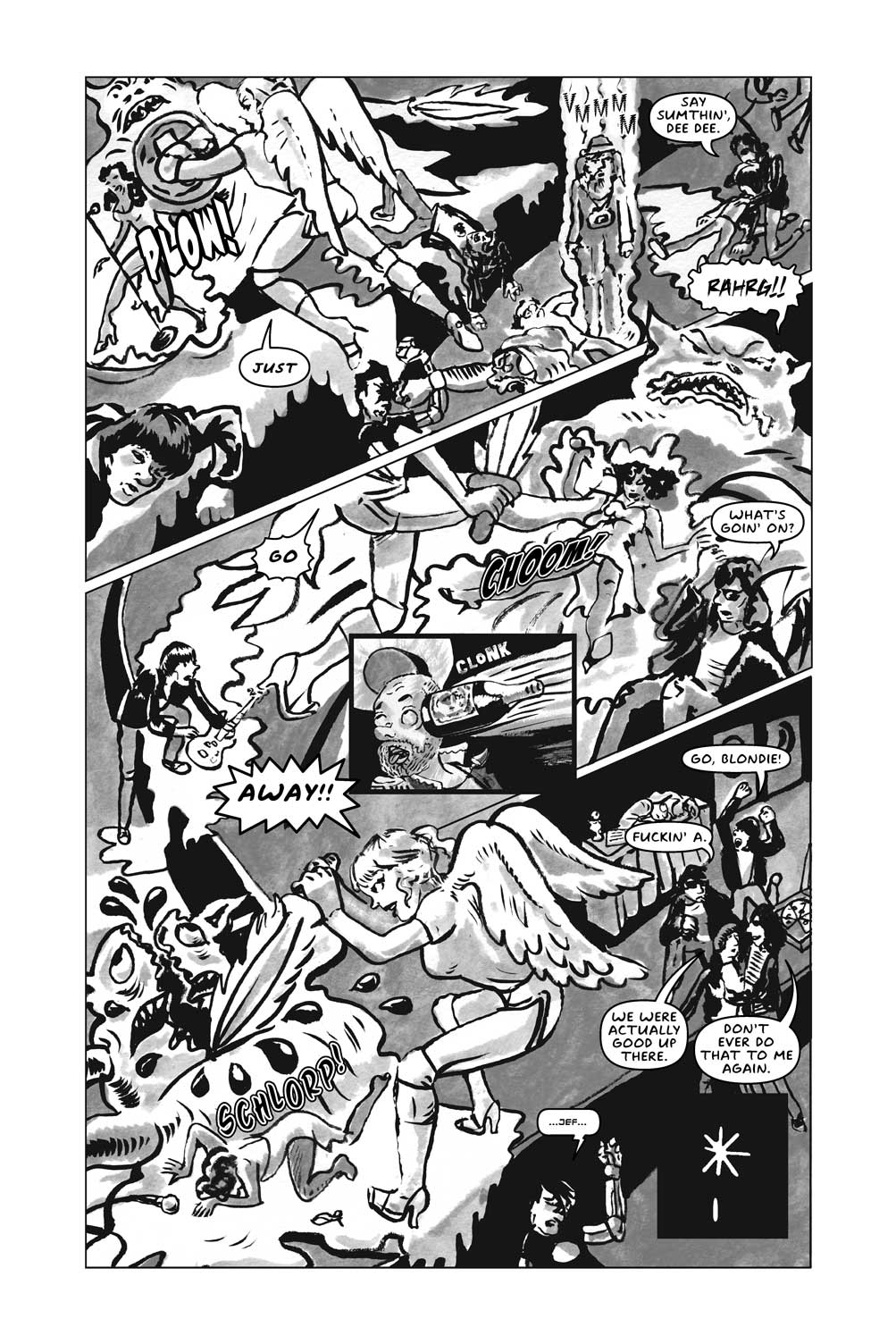 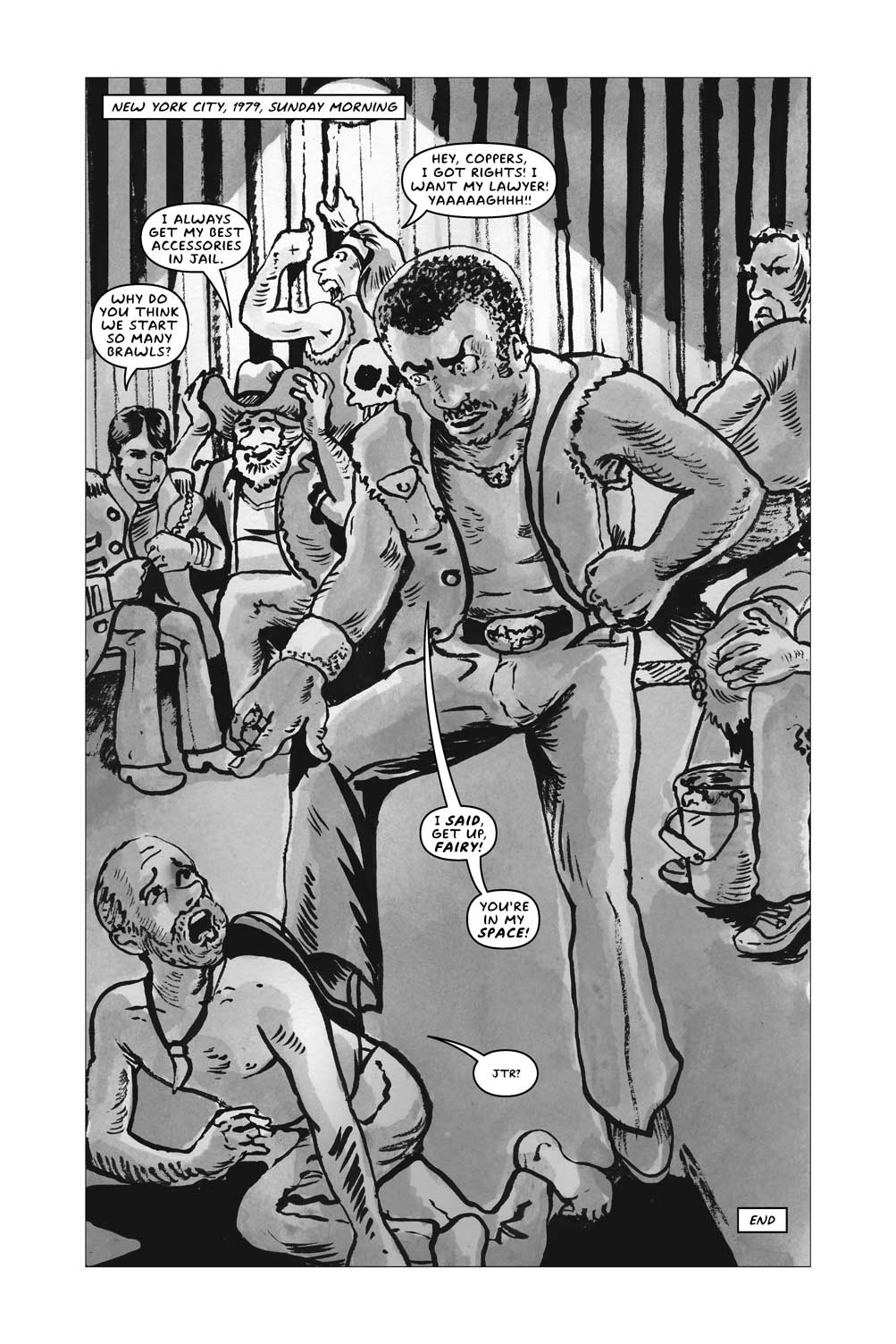 A little behind the scenes: I needed to fill 8 pages in an anthology I was self-publishing at the time, and my long-time friend Sam Vaughan pitched a longer story to me that was the same page length, but had, like, 9 to 12 panels per page, and so I edited that down to a plot based upon the big beats of Sam’s longer story, and scripted from there, using Sam’s exact dialogue from his initial submission for some scenes, adding or combining with my own for others. Then I roped in artist John Mathias, who played bass in Americans UK at the time, and who illustrated the comic using this amazing, seedy-Archie-like style. My pal Ben did a great job lettering all that jibber jabber! A wonderful collaboration all around, we created this Americans UK gem.

My original identity is long lost to the oceans of time. I remember being a young Earth male living in the 21st century, 15 years old, as they would have measured it. I lived on the North American continent, in a country called the United States of America, and within that, a government known as the state of Texas, and further within that, a County named Collin, in a town titled Prosper, a semi-rural and suburban member of the greater Dallas/Fort Worth Metroplex. I’ll just come out with it: I was a teen boy who died on Christmas day. For reasons mysterious and fantastic, I was chosen as a Spirit of Christmas, a specialized division in God’s army, as He proliferates his Theos throughout the multiverse, mining the cavern-system of reality for all its precious souls.

Every day I work to ruin Christmas. Somewhere, somewhen, across countless worlds, every day of my immortal life—it’s my job to undo the holiday. You see, given an infinity of bubble universes all subsumed within a Manichean reality, wherein two opposing entities compete for soul-stuff, Christmas emerged as a successful recruitment for the sort of metaphysical allegiances that drive sentient beings to devote themselves to my boss, aka, your God. The Christ story was the first successful, naturally occurring conversion of a winter solstice celebration into a temporal, soul-excavation-site that self-organizes and reemerges annually until certain Armageddon events destroy whatever culture evoked them in the first place. God is no dummy, and realized what a good thing he had going with this one, and so worked to invoke Christ stories into the narratives of every sentient world, creating a new officer class in His ranks, we of The Christmas Spirit division, 4 of us in total, specialists each of us: the Ghost of Christmas Past, the Ghost of Christmas Present, the Ghost of Christmas Future, and when things go to Hell, me—the Ghost of Christmas Never.

It’s kind of difficult to explain, but a Great Dragon-Worm sleeps curled within the fabrics of reality, slowly turning as it dreams of fire, whereby time and space are but jewels encrusted across its craggy hide. And while the Great Dragon-Worm sleeps, it competes against my boss for the mining of souls, dreaming up counter-agents to God’s host of angels, generating demons who roam Earths planting seeds to sour Christ stories and turn every Christmas against Him. My brethren and I descend upon these worlds infected by the Ex Mass, and while the others work to fix a world’s timeline to turn in our favor, I research its undoing. If the others fail, I either excise the Ex Mass (and thereby remove all Christmas celebrations from that reality throughout its timeline) or destroy the world. It’s a coin toss, really. I don’t like to contemplate what would happen if the Great Dragon-Worm ever woke up.

Look, I don’t want you to get the wrong idea. My colleagues are good at their jobs—excellent, even. But, again, given a multiverse, even a small percentage of failures is yet another infinity. No matter how fantastic my adventures, I admit, the job grows tiresome and I think I suffer from ennui. Just the other day, I was racing rogue elves circling the rings of an impossible planet in magical sleighs fueled by hope, and I had to syphon power from the fantasies of young, alien cartoonists just to eek out a win. I mean, how pathetic is that? As their galaxy collapsed around me, I took my victory lap, and I couldn’t help but think, is it all worth it?

There was this other time in the Silicon Realm, deep inside a hollow planet where I had confronted the Guardians of the Gone Crystal so that I could steal and shatter their holy gem, thereby sapping the strength of the surface’s ruler, Kr’rt the Conqueror, whose people celebrate Kr’rt Munst by exchanging paintings of the Great Dragon-Worm. And as I stood there, the gem crushed beneath my boot, my signal sent to the Ghost of Christmas Present that he could take the shot, I looked around the vast, dark space surrounding me, and wondered, is this all there is? Is this really me? Do I even like myself?

Between you and me, souls are pretty and all, but I sort of don’t get it. I mean, my boss and the other guy, they’re not even getting the whole thing! They’re fighting for fragments! A soul is like a diamond formed from the intense pressures of reality impacted on dust sloughed off by logos as it hums throughout the universe. But each individual person, any given personality, in any given epoch, in any given world, is but a facet of that dense and bright rock of identity. When my boss gets your soul, he’s just chipping off a piece from the source, completely unable to excavate the priceless mineral in whole. It’s kind of pathetic when you think about it. And what does He do with it? What does God do with the ontological representation of everything that you are? He adds it to his cape. He owns a cape sewn from soul shards. If you’re thinking, oh, well now I guess I’ll side with the Great Dragon-Worm, know that its minions grind the soul shards to a fine powder and collect it all in a giant bowl that the Great Dragon-Worm licks at in its sleep, presumably providing it with sustenance, but perhaps it just likes the taste.

It’s at times like this that I need to step back and be thankful for what I have. It’s not all global atrocities and extinction events. I’ve got a job. I’m immortal. I’ve even got a lady. Her soul is magnificent; I’ve seen the whole thing. In every reality, I find her iteration, a new face on a familiar entity. Her name is Annie, Wendy, Klurklurlot, Danielle, No. 7356, Phonos, Aroxes, and on and on ad infinitum. While her names and faces are countless, her soul is monolithic, and no matter if my team fails or succeeds, whether her universe lives or dies, I know that she will live on in some other world, and that I will find her and we will always spend Christmas together, in one way or another.

Anyway, thank you for listening, but I have to go now. On the outskirts of an adolescent solar system, the denizens of Extreme World have become addicted to what they call, “Dragon Cider,” a drink they imbibe exclusively during their athletic celebration of Kicks Max. My team is being called in. So, you know, don’t be a stranger. And please, do me a favor, seriously: have a Merry Christmas—or you might not get a new year.